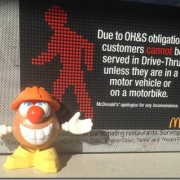 Organisations interested in cultural change need to think about, and understand their existing culture, then work hard over time to move toward a culture that they desire. Organisations can easily be seduced into ‘change programs’ that promise a lot in a short period of time, but fail to deliver because the organisation and its leaders are not prepared for the work and time required to achieve change. If it is a quick fix you are after, you are probably more concerned about ‘climate’ than ‘culture’ (more on this later).

This was certainly the case when I was talking to someone recently who very proudly told me about their ‘organisational change programs’. They said “our programs are remarkable! They are fast paced, interactive and get everyone engaged.” By this point I was already starting to tune out of the conversation, though I suspect that their slick and charismatic style would appeal to many.

The cracker though was when they told me; “our programs are so good that we turn organisational culture around in two days. Our clients are always happy with our results and we never fail to impress” They continued, (mainly because I could not stop them!), “in one recent program we had guys who were previously shouting and fighting with each other at work that, by the end of our program, were joking around and having fun together. That’s just the effect we have on people”.

Well by now, I had completely switched off but I’m not sure they noticed. All they were concerned with was boasting about their magical programs that, as they put it, “turned carcases into fighting animals”. Whatever that means?

I was sharing this story with some colleagues recently and we were so impressed with the business model and particularly the results, that we got to thinking about how we might be able to develop a similar business. We brainstormed for a short while and quickly came up with our business name, “Safety Culture to Go”.

Within twenty minutes we had our business plan set. We decided that we would target organisations that want change fast, that want results now, and that really want to engage their teams. The operations model we decided on was ‘drive through culture stations’. We’d place the stations around the country so organisations could simply arrange for their people to drive through, get a taste of culture and wham, there you have it, culture change would occur. For organisations wanting significant change, of course they could go for our ‘upsize’ service.

Sadly, I suspect that there are some people and organisations out there that would think this was firstly appealing, and secondly, could work!

Of course organisations who are genuinely interested in cultural change know that it is hard work, it is not something done quickly and it certainly isn’t something that should be left to a smooth talking salesperson to drive in your organisation.

Cameron and Quinn in their book Diagnosing and Changing Organisational Culture (p20, 2011) describes this well;

“It is also important to note that the concept of organisational culture is distinct from organisation climate. Climate consists of temporary attitudes, feelings, and perceptions of individuals (Schneider, 1990). Culture is an enduring, slow-to-change, core characteristic of organisations; because it is based on attitudes, climate can change quickly and dramatically. Culture refers to implicit, often indiscernible aspects of organisations, climate refers to more overt, observable attributes of organisations. Culture includes core values and consensual interpretations about how things are; climate includes individualistic perspectives that are modified frequently as situations change and new information is encountered”

This got me thinking about the things that people might see, feel and experience in organisations that focus on ‘culture to go’ rather than culture:

I Wish I Thought of That (risk assessment methodology)

I’m just not that into safety anymore
Scroll to top